I think this last week I blogger has had some problems. I could not reload it and it was acting strange. Things seem better know.


Dylan had a lovely outing on Tuesday to one of my art lessons. He managed to cover him self in blue ink which looked very stylish on his white coat! He got chased round a kitchen by three children who although probably terrorized him fed him three carrots two grapes a strawberry and lots of grass and dandelions. Of course they did some lovely pictures of him. I let them have some black paint which I thought was very exciting as its normally banned along with ready made green. 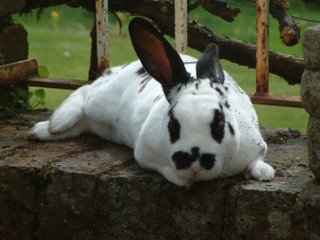 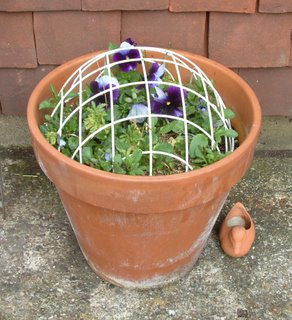 The next day he spent recovering in the garden.
I have tried to cover some of my pots. To protect them from the Dylan flower pot monster. I will have to make the holes smaller as he can get his cheeky little nose through the up side down hanging basket. Hence there are only flowers in the middle. The plants that I have crammed on top of his hutch are doing just fine! 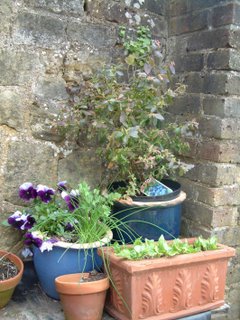 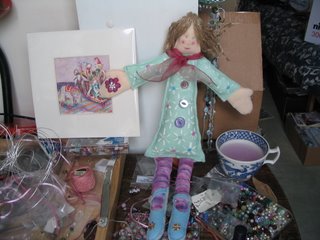 More and more I'm finding it really interesting to have real found objects to build a picture around. The willow cup in the photo was a starting point for the bluetits, and the rest followed. The cup is filled with dirty paint water, from painting Miltilda's tights. Miltilda is is the doll sitting next to the cup. Miltilda likes being in her garden best not on my bead table. She loves talking to her plants and watching them grow, when the sun is out she enjoys sitting in her very old deck chair drinking old fashion lemonade and eating sherbet lemons.

I have this week tackled my mount cutter and can now cut my own mounts, which I'm very pleased with. I'm looking forward to taking the little square picture back to the people I gave it too with its nice shiny mount. I have a number of new paintings that are slowly unfolding in my head. They are both based around objects. On is based on an old photo that has survived art folder to art folder for years waiting to be painted. The other I will have to go and find the right object to know how I'm going to lay it out on the paper. I don't think I'm going to get much painting done this weekend as hopefully we are going rock climbing tomorrow and then up to London on Sunday for Lunch but I will be creating my little scenes in my head.
Posted by Joanna at 10:25 AM 3 comments: 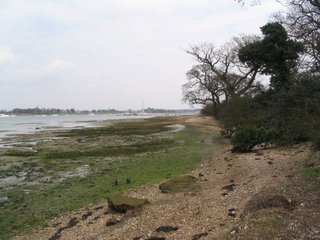 It was a nice weekend by Chichester Harbour. The sun did come out but I ran out of batteries to take a photo when it did. I managed to take my reference for my painting and sit by the fire in the sailing club. Eventualy I got the picture out of my head and onto the paper. I managed to drag myself away from the fire and go for a walk along the harbour, to see K out sailing. I like it by the mud and the seaweed. I sat watching for awhile untill the tide came in and I got chilly. So quickly went back in search of the fire.

Yesterday we spent at home and went out for a walk in a Hampshire valley that we did not know it existed. Its fun exploring new places.

Dylan got to do some exploring on his lead too. Down the garden to where the wild bunnies are. He enjoyed it and was sniffing the air at all the new smells.

I'm going to atempt to cook gnochi for tea. Its very easy and tastes yummy. Tonight instead of a tomatoe source I'm going to do a garlicy butter one on K's request. Dylan has turned his nose up at the beetroot stems I gave him for tea, oh well. 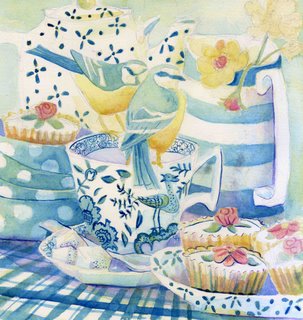 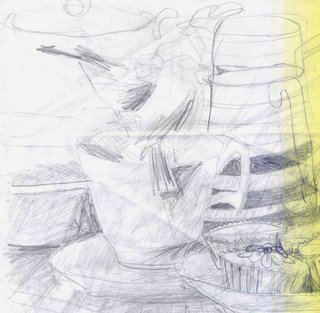 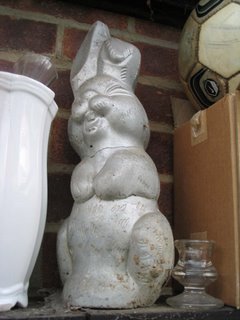 This is one of the very first bunnies I ever came across. I made him with my grandpa in his lovely greenhouse when I was 3 or 4. I was delighted with him and, am looking forward to having a garden where he can run under all the plants with Dylan. In the mean time he is keeping warm in my parents shed.

I nearly have a rough for the next painting its all going to be based around a tea cup. Thinking as I'm going to be by the river I might think about a picnic in a rowing boat. I want to make some rhubarb cup cakes for the weekend tonight. I have some left over stewed rhubarb from a crumble I made last week and a bowl full of that into a sponge mixture is very delicious.
Posted by Joanna at 9:57 AM 5 comments:

Dylan had such an exciting weekend he just wanted me to make a post about it, rabbit paws are not too good at typing. It did not start of too well as on Friday, nasty me took him to a horrid vet for a myxi jab. I did not like the vet as he held Dylan by the scruff of his neck which really frighten Dylan.

So on his lead we went to visit next door to see what the her latest creations and finds at the car boot sale where. Dylan very much liked warming up by the aga although Murphy the cat was not very sure about sharing it with him.

Then at the last minute Dylan decided it would be really mean of us not to take us him with us for the weekend. So he nervously got back in his carry box, it had too many bad memories of the vet. We got back quite late to Suffolk to my parents where he had a long run around the living room then settled down for the night in his holiday hutch.

He had two wonderful days running around a big garden and playing kiss chase with his rabbit friend Jessie. 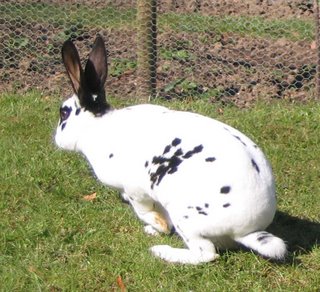 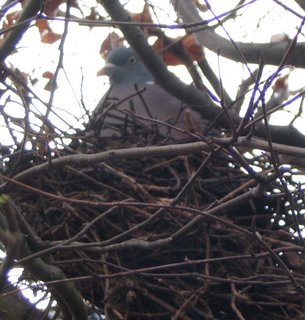 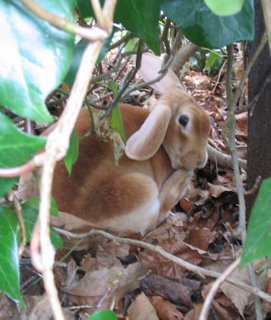 Matilda the woodpigion watched over, well from a distanced she lives 5 miles up the road, two doors down from K's parents. We made it back here late Sunday night after fighting a snow storm around the M25. Dylan jumped in his hutch and went straight to sleep exhuasted from his busy weekend. 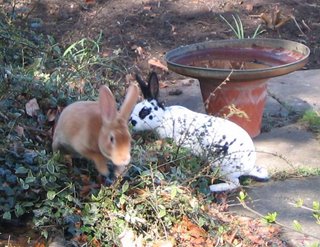 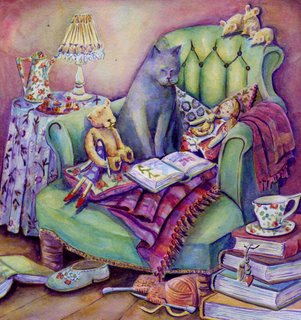 I have finished the cat but I made a bit of a meal of it and went in too heavy handed. I did some little roughs for it which worked out much better but I put too much yellow and it has come out a bit dark I might still see what I can do with it.

I have an idea for the next painting, I will have to have it planned by the weekend as K is sailing on saturday and sunday. If we can borrow a sensible boat I might go sailing on Monday.
Posted by Joanna at 11:15 AM 2 comments: 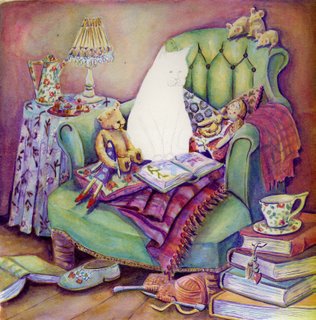 This week has flown by. I got loads done on this painting sitting by a lovely log fire on Saturday while K was sailing. Painting has been a little slow since then, which has not been helped by the fact that I'm not all together sure about the colour of the cat. I'm very bad at making decisions when I paint its the bit that slows me down. If I get all my cards packed tomorrow then I will get a chance to finish it hopefully.

Dylan has been enjoying the sunshine and has been out on his lead somemore but those girl bunnies seem to be getting ever closer to our little patio. If only they could meet and we could have lots of spotty bunnies running round the garden.
Posted by Joanna at 12:36 PM 7 comments: