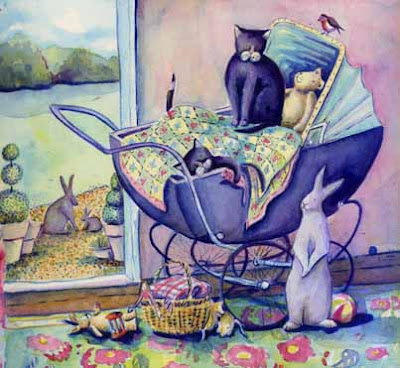 Old vintage prams look so comfy and cosy. My mum had a lovely big silver cross pram, that she would wheel me around in. I expect she took me for walks down to the duck pond at the end of the road and beyond getting all the wheels muddy. A lovely lady in the village takes her grandchild out for walks in a vintage pram, it must be wonderful seeing the world from from your little carriage.
Talking of meeting ones family, Captain Rupert has plucked up courage and would like to introduce his daughter little Miss Laura. He was not sure he wanted anyone really to know, I have told a few people and he has told me of, he feels ready now. 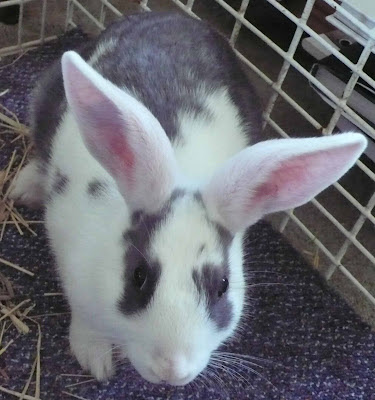 It happened, while he was on holiday with Miss Snowdrop and Great Aunt Velvet back in May. I had not idea they had kept it a secret from me. Great Aunt Velvet did her best as a chaperon of her two young charges, but she is getting on bit and nodded of for twenty winks and well... I don't need to say what happened.

Snowdrop had 3 in the litter the other two having a suit of grey just like there dad. It was all so unplanned and first time pregnancy that, Miss Laura's bothers sadly died.

I only found out about all this in August after picking Captain Rupert Up from his holidays. I asked who is that living with Miss Snowdrop, she looks like a new rabbit, how come they are getting on and then the story was told. I was a little worried Captain Rupert would have to take up his fatherly duties and she would have to come and live with us. Which I offered but she has decided to live with her mother. Captain Rupert will of course send parcels of carrots and dandelion leaves, and visit on his holidays. 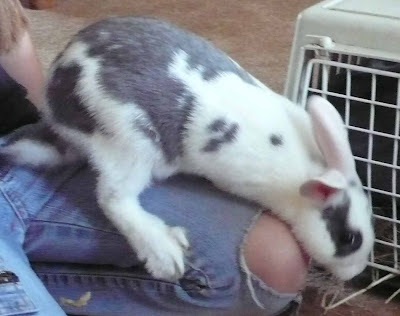 Saying goodbye on his last visit. You can see she has her fathers ears. I have promised her she will grow into them. She is very proud to have grey spots like her father and some of her mothers snow white coat.
Posted by Joanna at 10:12 AM

So this is Captain Rupert's important news, his antics do make great stories, and although very serious, this one made me giggle. Miss Laura looks very cute but I wonder whether she will be a born mischief maker like her father, in the photo she looks like she has an enquiring mind! I could probably dig out a photo of me as a baby in a big old silver cross pram, have you got a picture of you as a baby in one, maybe a future blog story? When I was little I remember having a miniature version with my dolls in, tippy tumbles, chatty cathy etc, you may be too young to remember these, this would be going back to the mid 60s! Thanks Jo for your memories on the great storm. Louise x

Captain Rupert should well be proud, Miss laura is a very pretty daughter whatever the circumstances of her arrival :o)
He is going to have to work extra hard in the vegetable patch now in order to provide plenty of carrots!

What a sweet story! I can't wait to spend more time on your blog. :)

awww, look at your legs and toesies all stretched out! =)

Well news.... indeed Jo, Congratulations are in order.
I do beleive it is customary for me to send a cigar to the new Father! Captain Rupert,secretely married!!
Miss Laura is a love!
Please give my best to Mrs. Snowdrop with a dozen roses.
Great Aunt Laura perhaps knew that a great love affair was in the air and did not want to interfere. So for her role I would like to send her a year's subscription to BUNNY Tales;)
LOVE your artwork!!
Holly

I'm glad you got the courage and introduced her Captain Rupert. She's lovely and you must be very proud!

being new here... did you paint that? it is lovely.

I too had a big pram like that as a baby.
My sister has one in her garage all wrapped up!
I keep thinking should I get it out for our new arrival in April ?
What do you think ?
Carolx

Oh my! Well, bunnies will be... bunnies, I suppose! I'm glad Captain Rupert is feeling fatherly and responsible. (She is darling)

Katherine Dreams,
I think you should get the old pram out, how exciting. Three wheeler push chairs are great for going of road but a nice gentle strol or a walk around the garden a pram would be lovely

Archi Ann, I painted this painting in August on a very wet rainy Isle of Wight, while K was sailing. I had to leave it a little while becuase I was not happy how it was going, but I'm just about happy with it now.

Captain Rupert is so proud to get such Lovely comments about his duaghter, he thinks we should print them out and send them to her and Miss Snowdrop.

Hi Joanna,
I have a little suprise for you, pop over and see me soon !
Carol x

Oh Ms Laura is adorable and what a cutie with those grey spots. And we luf the picture you made too, we could sleep all comfy in that pram ~the Fluffy Tribe

Ahhh, sweet ! Congratulations Captain Rupert.
I love the painting. We found an old pram from 1905 while doing up the barn for the shop. I thought it would either look good for displaying something, or we'll give it to the local museum, must clean it up a bit.Probably had lots of baby mice in it over the last years ! Take care XX

She is so pretty! And I can see the resemblence to her papa.

i'm in awe - i think it's an absolutely gorgeous painting
i bet they would love to hear all the nice comments! :-)
archi ann's mum!

She's definately her fathers girl. Good to here he's not shirting his responsibilities !

Thankyou so much for the seed and card package that arrived today !! I was so excited to see the wonderful gifts. I've also blogged about them today. Look out at your post box, and hopefully I'll send a package to you on friday as a thankyou ~ love Julia x

Joanna,
don't forget to add your award, just follow the link,,,
I think I will get the big pram out, as I do love a nice walk in the park and babies look so cosy and snug in the coach built prams,
I will post a photo when I have it all polished and gleaming.
X

How exciting - it's always good to hear of a new addition to the family!

My mother had a Silver Cross pram for me, and we had one when Hannah was a baby, too. Can you still buy prams? Rarely see them now!

Hi Jo, look into 'the home is where the heart is' you have been nominated for a Power of Schmooze award for services to blogging!

So Cabtain Rupert's a bit of a naughty boy then?
Oh well, boys will be boys, or as they say, rabbits will be rabbits.....

Good Morning Jo and cr and all family members.
Please put your thinking cap's on and stop by and play the "waiting game" with me.
best,
Hollyx

Hehe, captain Rupert, oh boy what a naughty rabbit! But i am really happy to have the chance to meet little Miss Laura, she looks so pretty with her dots and her pink ears :)) And i have to give you a compliment, you make fantastic paintings!! Love the old pram surrounded with happy animals :))

What a sweet rabbit. I love your paintings and you have a great website also.

One path leads to another and this path led to your utterly charming blog.. it is such a treat!
I will follow avidly the further adventures of Captain Rupert's adventures from now on..
I have a soft spot for the long eared fellows..my nickname is Rabbit..
Michelex

Captain Rupert has a daughter, congratulations.

That's the sweetest, most tragic and bittersweet story E-V-E-R!
Miss Laura is beautiful.
I've been looking at prams lately and there is nothing as beautiful as that one! I'm not sure it would fold up into the boot of my renault clio though...hee hee!
Lovely artwork, as always.

Oh how sweet! Congratulations to Captain Rupert! He must be a very proud Dad indeed.

Sophie Honeysuckle said...
This comment has been removed by a blog administrator.
1:46 AM