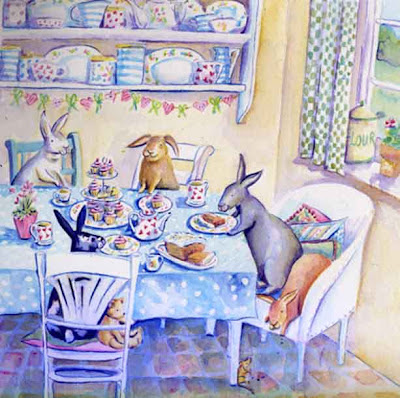 What a lucky bunny Captain Rupert is, I think his Christmas has come early. And thank you for all the concern over his little sneeze, he dried out just find. I always get worried when a rabbit sneezes any sign of illness can be serious in a rabbit. Its me who has been suffering the cold which is on the mend but has developed into a cough, K has been layed up in bed with a bug too.

Onto Captain Ruperts thank yous, Firstly he would like to thank, Louise at home is where the heart is for his award. Its his first ever award and he did an extra big binky (rabbit hop skip and a jump). 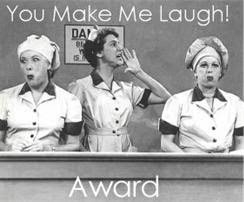 A while ago we received this wonderful little package from Julia with a little pillow for Captain Rupert to rest his little head on. Which he needed after the excitement of the tea party. I told Captain Rupert he should of said thank you sooner but then he only answered me back and said I ate all the chocolate so should of said thank you sooner as well. Thank you very much it was very kind of you. 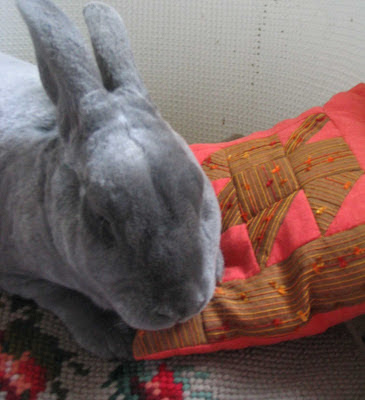 As you can see its just the right size and Captain Rupert enjoys having a little snooze resting on it.
We have both been delighted that some of Captain Ruperts rabbit friends at the house of rabbits who could not make it too his tea party had been able to cook there own carrot cake. Hope you all enjoyed is as much as us. 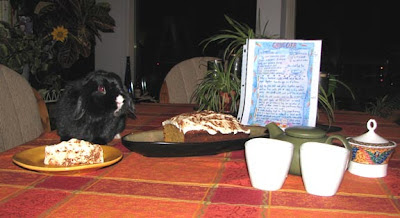 Today we received another package in the post Captain Rupert was ever so excited to see his very own name on the address and could not wait to open it. It was all wonderfully wrapped with a lovely post card. It was some Captain Rupert size bunting from Nonnie. How perfect and Captain Rupert could not wait to get decorating. Rabbits can be so impatient sometimes.
Thank you so much it will be displayed proudly some where captain Rupert has not quite decided wheres best he thinks it needs a little thought and he needs a little help to reach. It will be wonderful too at his next tea party or when the warmer weather arrives next year I think he would like to have a garden party. 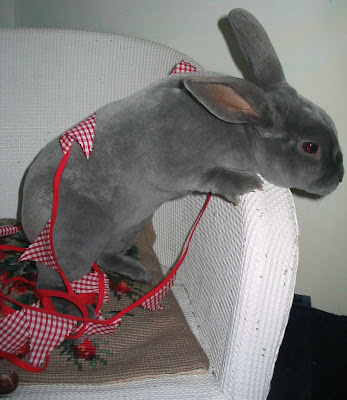 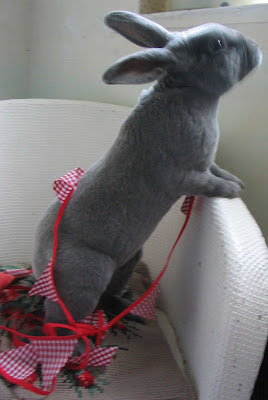 Love your finished card Jo, I wish I could draw and paint, I really mean it when I say your illustrating is amazing, I spot a flour jar on the windowsill with some of your special flour in? I hope you and K get over your horrible bugs soon, you should be over them before Christmas. Did Captain Rupert purchase his lovely blue spotty tablecloth from Woolies? Amazingly Captain Rupert's Christmas presents have arrived early, at least the postal service gets it right sometimes, a comfy cushion and mini bunting, what a very lucky rabbit he is. I still can't get over Captain Rupert's fur, he is just so velvety smooth, and so cosy to cuddle up to? x

Hello Jo
So sorry to hear you have been stricken with the horrible cold that is doing the rounds. I do hope you feel right as rain (or sun) soon and best wishes to K too!
Captain Rupert gets more handsome each time I see him and I think Nonnie's bunting looks very fetching on him. I have to whisper this as Pickles is getting a little jealous!
Take care of that cough.
Love Michelex

Captain Rupert ... your image is suffering a bit with those risque pictures of you and the bunting!

I thought you to be a very proper English bunny!

Glad you liked us liking your carrot cake recipe. I suspect it is being made all around the world! Quite a few people took a peek at the "Yankee" version we posted. We have just enough left for tea and cake later today.

What a lovely painting, so good to see you back in the swing of it, you have to include that bunting in the next tea party, it is too sweet!

Love the painting, just fabulous as always and you have such a distinctive style. Love the photos of Captain Rupert too, he really is having a great time at the moment! Jackie Mx

my you are so talented. i too wish i had the gift to draw and paint and the lovely imagination you have. thank you for sharing it with us!

hope you get to feeling much better fast.

Love the tea party, both versions.The Captain is awfully photogenic isn't he? My rabbits are thinking they will get some nice presents if they are on the internet too and are lobbying heavily.

Love the bunting, and your paintings are wonderful, very talented indeed, will pop over to your shop now for a peek, will be ordering a few but alas will now not be until after xmas, as I want a few to put in a frmae.
The bunny is so sweet...thanks for popping over..kath x

Wow! I'm really starting to look forward to the lovely art on this site! You folks get better, ok? We have yet to try out the Cake, but I'm sure it will be included in our Christmas over-eatin's!
Binkies!!

Glad to see that both the cushion and the bunting are being put to good use by the handsome Cap'n. He's a lucky bunny indeed!

I'm sorry I've missed a few of your posts and glad to hear Captain Rupert is okay! Your wonderful illustrations are an absolute joy to look at, you really are so talented. Clare x

Hope you're feeling better soon, Jo, colds can be quite the worst things at times!

Captain Rupert looks so soft and fluffy....and he looks so nice with his bunting. Merry Christmas to all of you!

Well, we gave you a tag Capt'n and mam. The rules, if you choose, are over on our site.

Those pictures of you are so adorable, Captain Rupert! Sometimes Bunny Mommy thinks that we are long lost cousins. And your pillow looks very comfy.

Thanks for popping over to comment on my blog, will hopefully have it finished for the end of January,will post up some photos.
Looking forward to the next instlament of your story....
Kath

Oh.. forgot to say I am trying to post a video on my blog(with great difficulty may I add) thought you might enjoy it, rabitts and bunnies are one of my favorite subjects,so hope you enjoy it..

Oh wow! what a gorgeous painting! you've got a beautiful style. Hope you get rid of your cold soon. It sounds like the same one that we've had here. Aaaaa chooo!

Please could you say merry christmas to Captain Rupert for me and give him a big snuggle! He's a very handsome rabbit. I bet he has all the bunnies chasing after him.

Oh Capt. Rupert you are such a cute and polite bunny. Mom wants to know if your knew bunny tea party painting is up for sale. She fell in love with it when she saw it? Nothing beats bunnies having tea and allowing the mousie some too ~Rabbie Burns

So glad he likes the cushion, how wonderful is that bunny size bunting !

Hi Joanna,
Your lovely print is beautifully framed and looks so nice on my wall I love it.
Happy New Year......
Hugs,
Carol xx

Captain Rupert looks very excited about Christmas, and very festive in his bunting!