Firstly though many apologies, for disappearing for a bit, its not that I have forgotten you. I have heard it said before, but its so true, the blog feels like a conversation and once left a little too long its so heard to pick up the reins again or get back into the flow of the conversation. There is no other excuse really it has been busy, I have been helping K alot and I'm trying to plan for some shows coming up in the next month which really always worry me far more than they need to. I will be looking forward to catching up and I must update my links in the side bar. 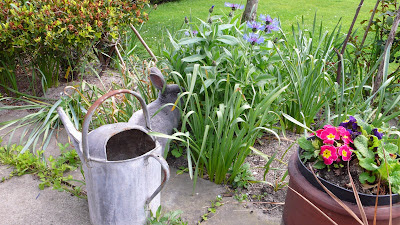 Right on with Captain Rupert's garden round up. He has much to report apart from saying there are lots of tasty green things to nibble on at the moment. I love this time of year in the garden, seeing things come back to life, sowing seeds and seeing all the colours again. 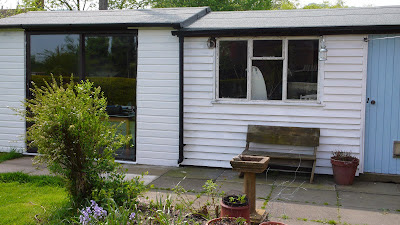 The sheds have turned from a dark brown to white and blue, we can't decide if they should all go blue or not yet. It really brightens up the patio area. I'm looking forward to doing up the summer house side of the shed, my aim is to hold a open studio in the summer house. The other side is K's domain full of tools, its a his and her shed.

Well Captain Rupert did not want to be left out of all this painting and we painted his house blue too! He does not spend much time here as everyday he runs around the garden and house as he wishes. He would rather not be tucked up in his house at night but I'm worried about nasty Mr Fox and have to tell him its for his own safety. I'm not sure what he thinks about the blue as he would rather go and eat my flowers than admire his blue house. 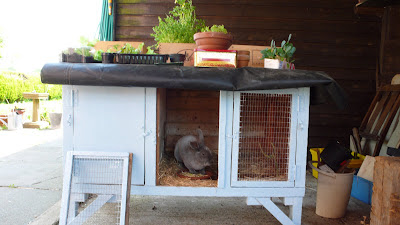 Gardening with a rabbit is tricky. I'm so pleased Captain Rupert does not like daffodils so we had a good display. I am slowly introducing plants from the front garden that he will only have a nibble on, sometimes I think a little nibble here and there will do the plants some good. 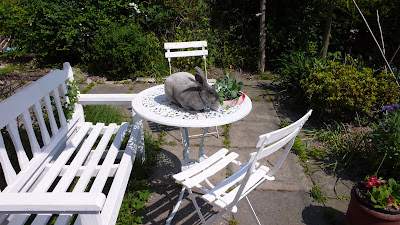 Oh who is that who has sneaked up on my nearly painted table (also going blue), thats my cabbage seedlings. 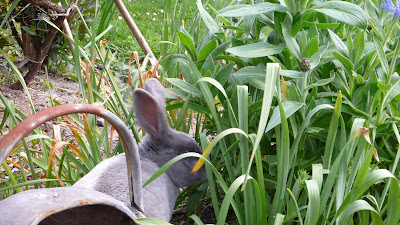 The veg patch is out of bounds to Captain Rupert, but he sits by the gate guarding it or maybe waiting for a chance to break in and have a feast of radishes. I have made a little scarecrow (I'm looking out for some little shoes for the scarecrow), and maybe it will remind captain Rupert of Peter Rabbit and his dad, just as a little warning that bunnies should stay out of some parts of the garden. 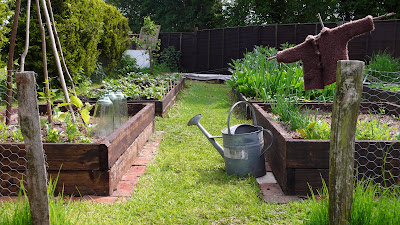 The veg patch is has been giving us salad leaves, spinach and sprouting broccoli. The broad beans are attracting loads of bees and all my seedling carrots and beetroot are doing well in this hot weather. K has been watching his potatoes and is looking forward to trying the 12 different varieties he planted. Also attracting lots of bees is the really yummy honey made by the beas in the village. I had no idea if I did not wash the plate and spoon up straight away, I would get a more than normall bee visitors looking for their honey! 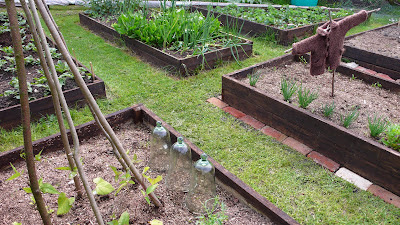 This was another nest rather less hidden than Mrs Blackbirds, but right next door. I'm not sure who built it. Its becoming a prime piece of real estate, in the hedge by the veg patch, which is lovely, I do hope they have some baby birds. 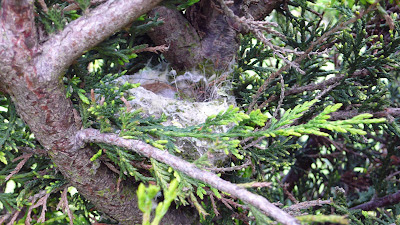 The nice weather has let me get the final coats of blue on the front door. I have planted my sweet peas, on old dried out hazel sticks and we have put up wires for the climbers to break up some of the bricks. 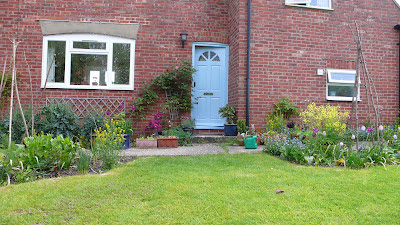 K has started sailing again which is great as I can get more painting and I have loads of making projects that I want to do. Keep an eye out for more Captain Rupert dolls!!