All visitors please report to the site office....... 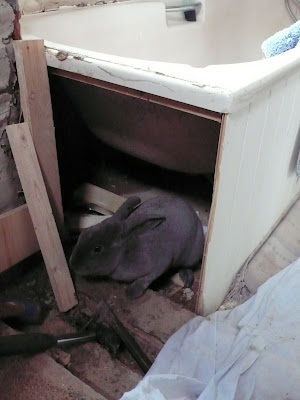 The new site office is located underneath the bath, if you have large sensitive ears it would be advisable for you to wear ear protection......health and safety and all that........due to the sudden bashing, hammering and general demolition on site its very unpredictable and finishes very late at night.

It all went mad between christmas and the new year with the start of the inside building work, which has meant knocking down lots of walls and stairs. I was prepared for dust and dirt but it was much worse than I could imagine. Captain Rupert was not so fazed and watched on in bemusement, from the relative safety of his new site office....since someone removed the stairs and he could not hide out in the make shift camps under the beds.
With half the stairs missing for a week was interesting indeed and very tricky at night, with a down stairs bathroom....... captain rupert was not the only one who found it hard to get upstairs, I seriously thought about camping out in the sitting room...but the contents of the kitchen beat me too the floor space sheltering in the relatively warm and dust free zone.

K got the new stairs built quickly which was wonderful, I was very impressed. Knocking walls down and making the stairs go straight down meant we can now get to our bathroom at the bottom of the stairs. K also had to build a new door frame and I'm building a shelf in the space above. To do this we had to build a porch and knock a big bit off outside wall down. It was a very cold and chilly night the front door got moved out into its new position. 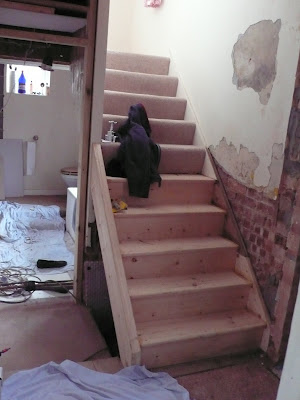 A slight slow down in the stair building was tanking out the space underneath for K to have a wine cellar. Captain Rupert thought he should inspect this space and is not really sure there is enough space for wine in K's new wine cubby hole. If only K had let him do the digging in all that lovely dirt under the stairs, he could of built a inside burrow with twists and turns and ample storage for bottles of wine. 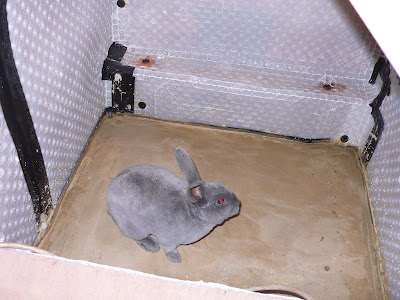 If not in the site office Captain Rupert can be found in the new hall, he can make a quick retreat through the new bathroom door back into the site office, very important for cabbage leaf tea breaks and any sudden loud sounds when his not wearing his rabbit ear protection, up the stairs, although his not so bothered now he has his very own site office, a quick warm up by the fire, or a breath of fresh air away from all the dust a chance to clean the dust from between his ears and whiskers. 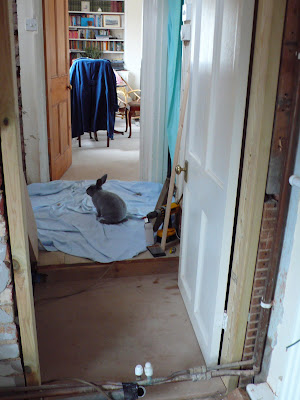 (notice the trip hazard of the old plumbing and the two white stoppers which used to supply the sink which had to go for the new door, K will run new pipe work around the other side. of the room.)

Escape to the garden from the hall is made possible by the new french doors that replaced a kitchen window. 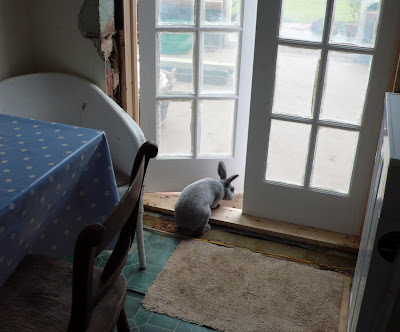 Captain Rupert is most puzzled the old back door has gone, and is going to be replaced by a shower of all things. 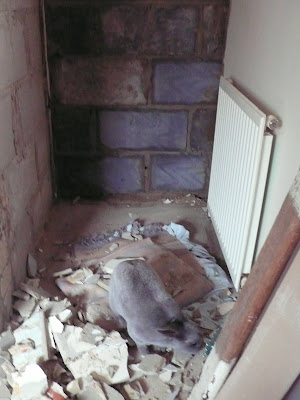 The old bathroom entrance is going to be blocked off and a recess for a vanity unit made. 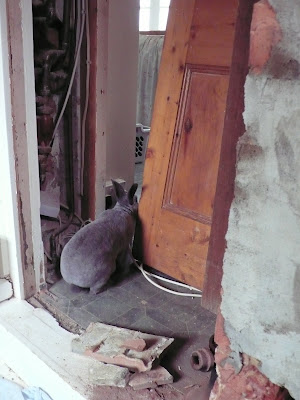 But for the time being it makes a great emergency escape route from the site office too the new french doors for captain rupert even if the idea of open plan kitchen bathrooms for me at least has not really caught on and I'm relieved to only have two doors into the bathroom rather than four which we had at one point. 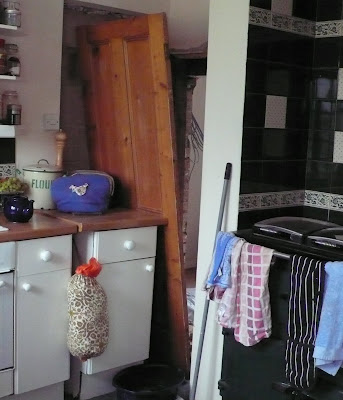 And I'm going to get more kitchen space as all the doors are being blocked up. The kitchen is another project for another time, but it will be so nice one day to change the dark green tiles.

Confused about all our walls up and down, well we are its very strange when you go to the back door and its not there anymore. It has made such a huge change as the house is very small and its opened the space up, although its hard to show that in the pictures.

I do now feel we are on the home straight and will all feel loads better once the plasterer is in and it all looks better.

Oh.......captain rupert has a visitor to his site office.... he was expecting someone to advise on some top secret plans his drafting in some of the darker cooler depths of underneath the bath. He has been keeping lots of odd bits of wood away in the site office, I keep wanting them for fire wood and his not letting me, saying they are very important for his building plans. I think we have been giving him ideas.

He might tell me off for letting his plans slip.......... but I think his drawing up plans for a fox deterrent, come scarer that can be fitted to all all his friends houses to keep the big bad fox at bay maybe not sure........ his keeping it secret.