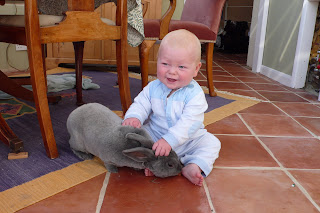 Torquil has been making friends with Captain Rupert, they have learnt they have the same interest in crusts of bread and carrot tops. Its great they have found this common ground as I think Captain Rupert had been suffering from depression since Torquil was born, I never thought it would effect a rabbit so much, but Captain Rupert is a very cuddly rabbit and I completely underestimated the effect of a little person would have on him.

Torquil is enjoying the great out doors his crawling and pulling himself up on the nearest object he can get too. Which reminds me I was going to do a post on how he got his name. 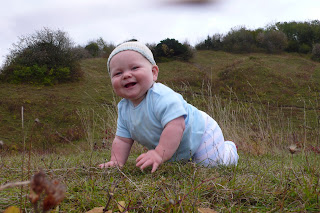 It goes back to just over a year ago and K and I trudge about camping up mountains in the Pyrenees...I was about 14 weeks pregnant. On the last day we had to walk back from Spain to France though the breche de Roland...a gap in the mountains. We had to go quickly .....the weather was meant to be turning......with the clouds closing in..... I huffed and puffed my way with the ever growing bump.

I just made it to the mountain hut on the french side when it started to Thunder.....K followed behind after he attempted to get to the top of a little mountain near by......He rain down to the safety of the hut with the thunder and lightening crashing and banging behind him.

So we spent the afternoon in a nice warm hut with a lovely cosy fire going eyeing up the thunder storm and trying to decide what to do.

It was my great idea to get down the mountain away from the hut and the black mould....There was still thunder but it did not seem as bad.

Until a third of the way down it got very dark.......and then it was clear the thunder storm was coming directly down our valley. When it passed over us we crouched down low in the best place we could find. It was really very scary

We made it to a little cabin where we met a french man from paris, he had cleaned the hut with a feather he had found and it certainly was a welcome sight.

Torquil comes from old Norse......The god Thor and his cauldron where he brews his thunder or strong soldiers. Its also an old Scottish name.

More soon, I have managed to do a little drawing and have a head brimming with ideas for pictures. 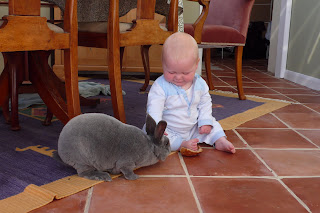